Top 5 RuneScape Glitches OF All Time

RSPS News
Admin
posted on 1 year ago — updated on 3 weeks ago
2,362
views
RSPS-Advertisement RSPS News
In this Article, RuneLeak counts down the top 5 glitches ever to be brought forward publicly by players as far back as RuneScape classic, up until today's version of RuneScape that we all play now.

A lot of people know this to be the infamous party hat duplication glitch from RSC, but the player who first performed this glitch didn't intend for it to be an item duplication glitch at all. A player named six feet under had been experimenting with Runescape while using a third party software called AutoRune in an attempt to be able to trade the scythe for money that he got from the holiday event. Although six feet under never managed to trade the scythe he did manage to discover however to create any nonstackable item twice essentially duplicating the item. Jagex eventually offered a reward to any player who could email them explaining how the glitch was properly done and a certain player came forward with the information that they were looking for. Jagex stated that removing all of the items that were duplicated would be impossible back then due to the lack of technology that they now possess today. and that rolling back the savegame files of players accounts would be in and we quote "overreaction" the glitch was eventually fixed. 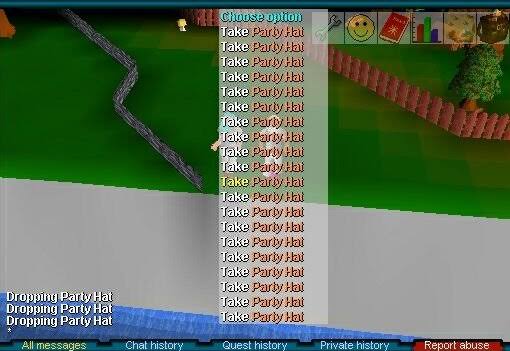 If you ever watched teh noob show as a kid then you may remember who the player The Box Noob was he was always seen in these videos walking around and holding a big crate having thousands of people follow him. The glitch was done by starting the quest Death to the Dorgeshuun and getting to a certain point in the quest where you had to put a goblin named Zanik in a crate and carry her down into a dungeon. When picking up the crate you could press a stat button like your attack leveled defense and so on and the menu would pop up but you'd still be holding the crate you would have to click a stat menu and quickly right-click your friend and press follow before the menu came up, allowing your friend to walk while you followed him or her outside of the quest zone with the crate still in hand. There were other ways to do it by yourself where you could actually walk without stat menu or a friend but still hold a crate but only a select group figured out how to do it and the glitch remains a mystery till today.

This is a glitch that was done in the duel arena by an unknown player in 2013 and he belonged to a group of six people known as the haxunit. This glitch was done by having maximum cash in your money pouch and staking it but somehow keeping it inside of your money pouch, unfortunately, it was never figured out how the glitch was done. HaxUnit is said to be the cause of a lot of bug abuses and glitches including getting a fire cape on a level three account, to being able to attack other people outside of the duel arena. there is probably still some glitches they are abusing till today but we just don't know about them. No one knows if this glitch was fixed but none is ever going to find out soon as the group is very confidential about their methods and as well as hiding their usernames of their main accounts in-game.

2. The no clip glitch of old school RuneScape

A player figured out how to noclip through the walls starting somewhere down inside of the lumbered swamp dungeons, but he didn't just stop there he eventually figured out how to get up to the main levels of RuneScape using this no clipping glitch. However, there were actually no other players or NPCs located on the map anymore when he managed to get to the surface even though he was still in a populated world. He even managed to noclip to a small portion of the town Draynor though the rest of the town doesn't exist because it is a hidden location on the map, where the infamous wise old man cutscene takes place if you look at the edges of the town you can see that it is cut off from the rest of the world meaning it is located in the RuneScape map somewhere. but it is located underneath the ground in the lower dungeons levels where this player started out doing the note clip glitch in the first place.

Taking place oddly on June 6, 2006, this has got to be one of the most famous glitches in all of RuneScape, Ominously enough taking place on a date like 666 the players of RuneScape had never seen a glitch like this before so when it started happening players went absolutely berserk. A player named Cursed You had just received 99 construction and was having a massive house party. The construction skill had just been released so it had a lot of glitches and a player named Duriel321 took advantage of one of the most deadly ones. He found a way to attack people while being outside of the wilderness, he used a combat ring in Cursed You's house and managed to make it back to Falador somehow where he killed numerous players for their rares including a green party hat that he was seen wearing in this picture. What was even scarier was the fact that the other players couldn't attack him back all it would say on their screen even if Auto retaliation was turned on was you can not attack players who aren't in the wilderness. Duriel's rampage went from Falador all the way to Edgeville where he shortly got disconnected. When he logged back in he couldn't attack anybody anymore and suspected a ban would shortly follow so he gave his Green Party hat to a friend, shortly after that he was banned permanently.